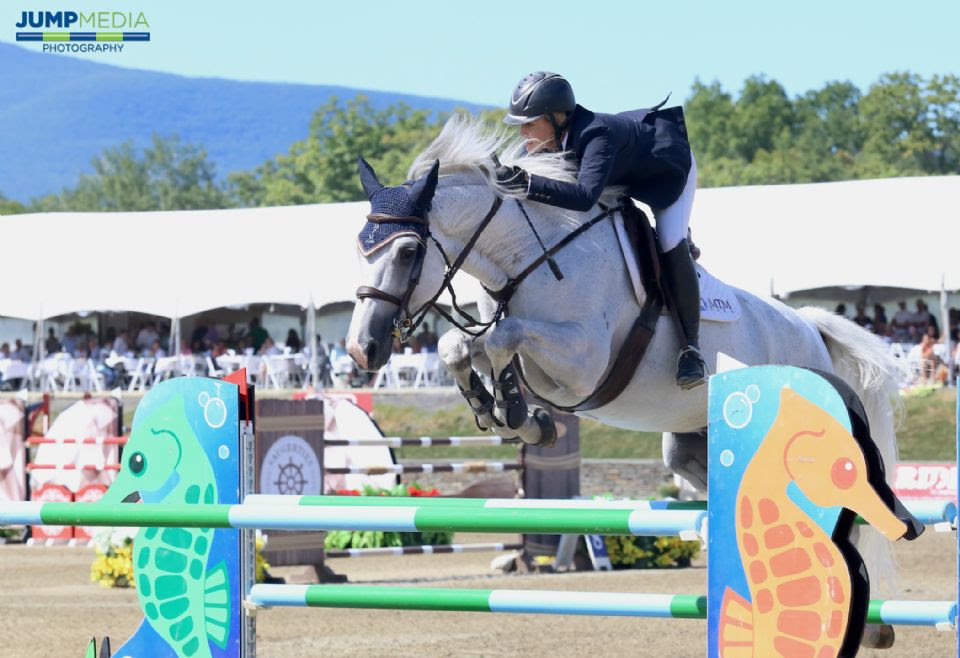 Fenney, who hails from Flower Mound, TX, and MTM Reve du Paradis, an 11-year-old grey Selle Francais gelding (Crown Z x Adelfos) were selected as winners of the Equis Best Presented Horse Award by members of the ground jury at HITS Saugerties. During the FEI Horse Inspection, the ground jury evaluated each horse and handler on appearance, including grooming, tack, behavior, jog attire, and interaction with the judges.

Fenney presented MTM Reve du Paradis, who is owned by her MTM Farm, at the FEI Horse Inspection, but attributed the horse’s appearance to her groom.

“I have to thank my groom, Ismael, for all the work he put into making the horse look its best,” she said. “It is always great to get awards, and this one is special for the whole team. We really appreciate it.”

Fenney has had the ride on MTM Reve du Paradis for a year and a half and admits they have been gearing up for FEI competition all year. When asked what her goals are for the gelding, she responded, “Bringing him up to this level has been the goal, so we will just have to wait and see how he handles it.”

For the Equis Best Presented Horse Award, Fenney was presented with a set of Kentucky Moonboots from Lauren Kenney of Equis Boutique prior to the start of the HITS Saugerties $1 Million Grand Prix CSI 5*.

Equis Boutique is a shopping experience for the discerning equestrian and offers the most convenient and luxurious choice for top equine brands to dress the horse and rider. Featured brands include Parlanti, Manfredi Equestrian, KASK Helmets, Anna Scarpati, Kingsland Equestrian, Kentucky Horsewear, Animo, and Dy’on, as well as a variety of imported specialty bits and Official FEI and Just World International merchandise.

With a vision to raise the bar for FEI-sanctioned horse shows, Equis Boutique offers the Best Presented Horse Award at top events throughout North America. The next presentation will take place at the American Gold Cup CSI-W4*, which will take place September 14 through 18 at Old Salem Farm in North Salem, NY.

For more information on Equis, LLC boutiques, please visit EquisBoutique.com, or look for Equis Boutique on Facebook and Instagram!  Email info@equisboutique.com for questions on the stores and their products.