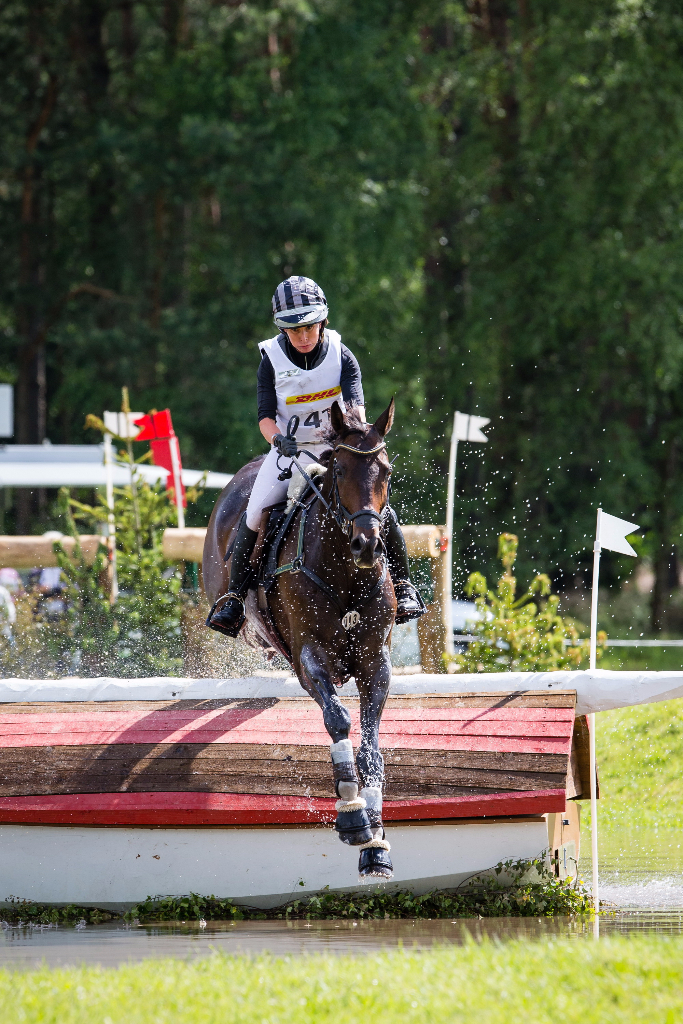 Press release FEI | Eventing – Bettina Hoy (GER) proved she is at the very top of her game when retaining her lead after cross country at Luhmühlen CCI 4* presented by DHL, fifth leg of the FEI Classics™ series. In a remarkable double, the in-form rider is also heading the three-star competition at Germany’s most famous eventing venue which is celebrating its 60th anniversary.

Hoy, 54, has more than three decades’ experience of Luhmühlen’s wooded tracks and testing water complexes – she competed here in the 1982 World Championships – and she punched the air with delight as a perfectly timed round on Designer 10 kept her in pole position. However, she will need all her expertise in tomorrow’s jumping phase as the price of one rail covers the top four riders.

„My watch stopped working around the seven minute mark, which left me a little unsure about the time, but I know he is a really fast horse, so I knew I would be able to just go for it!“, overnight leader Bettina Hoy (GER).

Julia Krajewski (GER) and Samourai du Thot, third last year, thrilled a bumper home crowd enjoying brilliant sunshine and great sport with their superb performance. They are still in second place and clearly laid the ghost of an unhappy elimination at the Rio Olympics last year.

„I felt Sam was fitter and more mature this year so I pushed from the beginning and didn’t have one bad moment. I’m very proud of him“, second-placed Julia Krajewski (GER).

Nicola Wilson (GBR) showed all her horsemanship to contain her bold mare, Bulana, and they moved up to third place after Marilyn Little (USA) and RF Scandalous, third after Dressage, picked up 6.8 time penalties and slipped to ninth. The 50 penalties initially awarded to Little for missing a flag at a skinny brush arrowhead were removed after the Ground Jury reviewed video footage of the incident.

“The course was an absolute pleasure to ride and will have been good for horses competing at this level for the first time”, third-placed Nicola Wilson (GBR).

Otherwise, the leaderboard is little changed at the top, apart from the departure of Astier Nicolas and Molokai, fifth after dressage, after the French Olympic gold medallist was unseated at the water complex at 19.

Britain’s Sarah Bullimore (Lilli Corinne) has moved up two places to fourth and within a fence of the leader after a clear round eight seconds inside the optimum time of 11 minutes 11 seconds. Maxime Livio (FRA), currently second in the FEI Classics™ series leaderboard, has moved up a place to 11th on Opium de Verrieres, but he will need to finish in the top 10 if he is to add any more points.
Tomorrow’s jumping phase, which promises to be a thrilling affair, is live on FEI TV from 13:35 CEST.