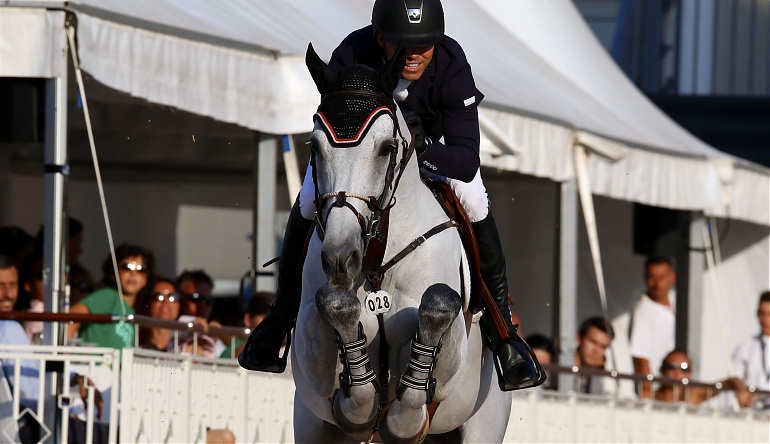 Top US rider Kent Farrington blew away the opposition today winning the first class and making it a triple victory celebration at his debut in Shanghai.

Kent was on fire again against a diamond-studded field of top riders in the $85,000 Massimo Dutti Trophy in bright sunshine in Shanghai. US riders were able to bring their horses to the event on mainland China after a special dispensation this year allowing them to compete

Kent was third in the ring on Blue Angel, his super talented bay mare owned by Robin Parsky. He executed a superb round ruthlessly setting a tough time of 67.41 and leaving the rest of the field with a real headache on the time to beat.

Time and again Kent’s lead looked under pressure as show jumping stars including Ludger Beerbaum, Gregory Wathelet, Edwina Tops-Alexander and Marco Kutscher all pulled out the stops to try and get within the leader.

Ludger, on his grey stallion Colestus, let rip in hot pursuit of Kent and tore around the arena, but had a rail down as did Gregory Wathelet. Kutscher on van Gogh came closest finishing in 70.31 but it was Kent’s glory day again.

Speaking of his success in Shanghai Kent said: “It has been a great show, really exciting to come here to China. I have never been before. GCT has put on an amazing event here. With the riders at these competitions, the best riders in the world, you can never be sure you are going to win. Everybody is good and there is big prize money on the line.”

Of his first victory in Shanghai on Blue Angel he said: “I know this horse. She is naturally a very fast horse. My plan is to be competitive on all of the horses in all of the classes and try to win every time.”

Blue Angel’s owner Robin Parsky said: “Blue Angel is an amazing horse. She loves to be in the winner’s circle. I could not be more proud of Kent, he has done a wonderful job with his horses. The horses are always happy and healthy.”

In an exclusive interview in the GCT TV live studio Kent also said he was originally planning to be a jockey, which explains his natural ability as a speed rider: “I started out racing ponies, I wanted to be a jockey actually. I rode a lot of thoroughbred horses that were very fast.”

Kent switched to show jumping and admits he “got hooked” and is very competitive at all times.

As well as today’s extremely fast win on Blue Angel, Kent also won on Waomi and said of the horse: “This is a totally different style, a bigger horse and very careful but I decided to go for speed building her confidence.”

Consistently in the Top 5 and Top 10 in the world Kent said: “It is not just determination, I have a great team of owners and horses and a great team around me. It has taken a long time to get here. I started at the bottom of the sport, clawing my way up.”

From 17 to 20 September the Longines Global Champions Tour is coming to Vienna again. Tickets for the VIENNA MASTERS are already available on the eventwebsite.