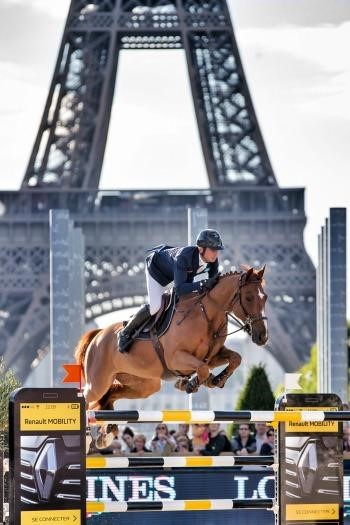 Press release | Showjumping – Six 5* Grand Prix have taken place in France since the beginning of the year and our national Julien Epaillard has won two on his own. The first one was the World Cup leg of Bordeaux, in February with Quatrin de la Roque LM. The second one was tonight at the Longines Global Champions Tour – Longines Paris Eiffel Jumping, with a young 9y-old who discovered this level of competition for the first time : Usual Suspect D’Auge. Another success towards the international elite of this sport: “it’s unbelievable, I’ve never won a 5* Grand Prix before this year, and now I list two, in France!”

The first round was a real streamlining during which poles fell down like leaves during the fall, leaving only three candidates to the victory. A technical round which led to a lot of mistakes by top riders, and particularly our three national Olympic champions, besides Epaillard. Two major clients were left to beat in order to win this Longines Global Champions Tour of Paris: Netherlands Harrie Smolders and his powerful Don VHP Z and Belgium Olivier Philippaerts with H&M Legend of Love, known to be pretty fast.

Anyway, this jump-off has promised to not be an easy ride on the Champ de Mars. After a smooth ride by the Dutch rider, who “tried to go as fast as possible. I knew my opponents were fast. This said, Don is the most trustworthy and regular horse possible”, Epaillard went all for it, particularly in the last line where he didn’t think it through, swallowing the last two fences in four strides: “Of course, I had zero hesitation. We were only three in the jump-off and I thought, at worst, I would end third. So I took my chance and went for it”. And little Usual Suspect D’auge, at 9y-old and with a playful nature, showed no sign of uncertainty, even for its first 5* Grand Prix. As he has always done this, and stopped the time with two seconds and a half in advance from Harris Smolders’s big stallion. Olivier Philippaerts and H&M Lefend of Love have finally finished between the French and the Dutch, most likely playing safe: “It’s my first podium on the Longines Global Champions Tour and I’m very satisfied”, explained the rider.

Julien Epaillard could be twice more pleased, as Usual Suspect was born in his own stables in the Pays d’Auge, exceptional thing to point at this level. However, we will not see the horse at the European Championship because of one little flaw: “he doesn’t jump the rivers. It’s quite a luck we had none today. It’s a great surprise for me to win under our Eiffel Tower. It’s my first podium on the Longines Global Champions Tour circuit. It’s been a while since I try and it’s not always easy to face our world’s best. It’s my greatest victory!” It’s also his second victory with this young stallion at the Champ de Mars as last night, they already won the High Jump of Paris by jumping over the 1,95m.

Kevin Staut and Julien Epaillard have offered two great French victories this Saturday at the Longines Global Champions Tour – Longines Paris Eiffel Jumping to their Parisian public who came at large. Stands packed despite a tendentious weather, a warm welcome to every rider who entered the arena and most of all, intense and breathtaking moments of sports. The Eiffel Sunday tomorrow promises the same, to highlight sport thanks to Paris 2024 and youth through the Kids Cup. Beside everything, the Massimo Dutti Eiffel Challenge at 3:45 will be a must-see, gathering all top riders of this week-end.