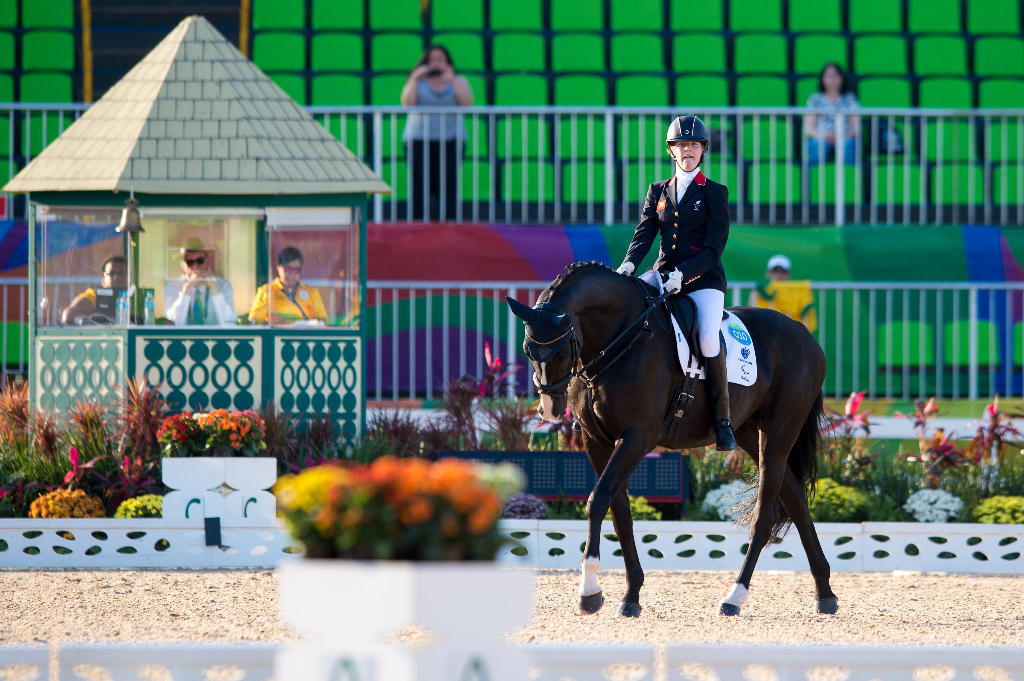 “For her to go in that loud, atmospheric arena I was over the moon with her,” Christiansen said after her test. “And I’ve got a really bad cold today so I had to contend with that as well.

“It felt a bit tentative and it’s nice getting that score knowing that there’s more to come.”

Belgium’s Michèle George won the grade IV team test in the morning, setting out her stall for the defence of her two individual London 2012 titles in the process.

Riding FBW Rainman, the current world champion scored 75.286% to finish just over half a percentage point ahead of Great Britain’s Sophie Wells. Frank Hosmar of The Netherlands was third.

“It felt great,” said George after her test. “I was very happy with my horse. When I came in he was a little bit under because there were a lot of things to see and he’s very sensitive to that, but I think the warmth was in my favour today.

Wells’ solid performance opened the scoring for Great Britain in the team competition in the best way possible. “He went in and listened to what he had to do,” she said. “He was a little nervous which is understandable as he’s not been to a Paralympics before, but he came back to me and concentrated and did what he needed to do.”

Following the day’s tests Great Britain currently lead the team competition, ahead of Belgium and Germany. The competition is still not half-way through however, as the results of Tuesday’s (13 September) grade II team test, and then the five individual tests which follow will also be counted.

One of the more emotional moments of Monday’s competition came when Uruguay’s Alfonsina Maldonado, riding Da Vinci, competed her test. Maldonado’s debut marks the first time Uruguay has entered the para-dressage competition and it appeared that the nerves and pressure of the event may have affected her. She finished at the bottom of the nine-rider field and left the arena in tears. “I always dreamed to be a champion,” she said afterwards, “The horse was really good but I was really nervous and emotional because it was the first time my family was here to see me and I couldn’t control my hands and legs. I hope that my country feels proud. I did my best.”