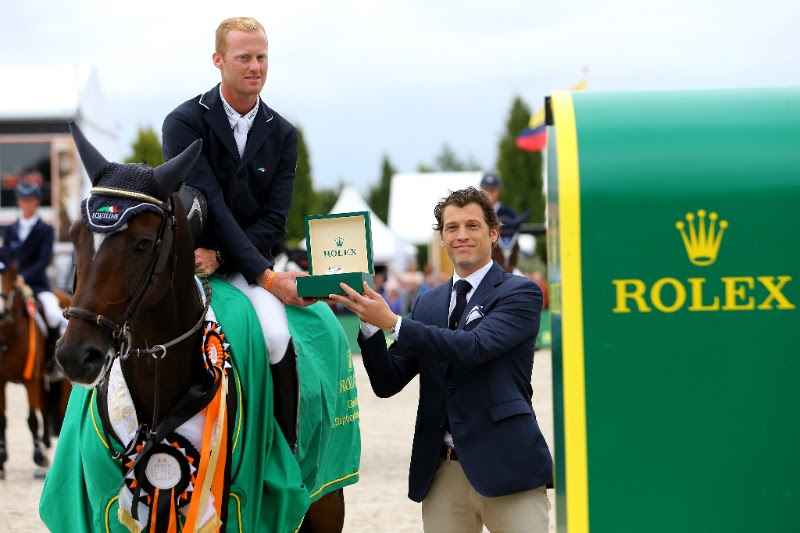 Press release Stephex Masters – Niels Bruynseels (BEL) concluded his fantastic weekend at the Brussels Stephex Masters in the best possible way when he went to the top in Sunday’s CSI5* € 300 000 Rolex Grand Prix presented by Audi.

After his win in Friday night’s Top Sport Flandres Prize, Bruynseels came with a typically quiet warning of what was to come when he said that he hoped that he would “grow into the event.” An understatement, as his Grand Prix performance would illustrate.

There was barely room to move as the competition got underway; the Brussel-crowds met up plentiful for the highlight of the weekend and the beautiful VIP was fully seated to create a fantastic atmosphere for the riders as the Rolex Grand Prix presented by Audi got underway.

The first round track designed by Uliano Vezzani (ITA) counted thirteen fences and the faults spread out over the cleverly build course. In the end, thirteen riders produced clear rounds to proceed to the jump-off.

With some of the world’s best riders in it, such as Rolex testimonies and Olympic Champions Eric Lamaze (CAN), Rodrigo Pessoa (BRA) and Steve Guerdat (SUI) – it was bound to be an exciting jump-off.

Janne Friederike Meyer (GER) was the one to open the jump-off on the powerful Goja 27 (Wandor van de Mispelaere x Palestro vd Begijnakker), a horse bought from Stephex Stables three years ago. The 10-year-old gelding displayed his jumping skills with yet another incredible performance, and Meyer put pressure on those to come with a clear round in 49 seconds. Eric Lamaze, Rodrigo Pessoa, Nicola Philippaerts (BEL) and Pieter Devos (BEL) all tried – but picked up faults in their attempts to catch up with Meyer.

However, Niels Bruynseels would get it all completely right. With the extremely quick and careful 10-year-old mare Cas de Liberte (Cracky Z x Chellano Z), Bruynseels got an excellent turn to the second vertical before he went on to use the three long stretches that followed to the maximum. Taking all the risk on the long run to the STX vertical – the third last fence – the spectators held their breaths, before they started cheering Niels on as he approached the penultimate oxer. This led the way to the very last stretch that went all the way down the long side of the ring to the final Rolex plank. As Bruynseels crossed the finish line, the crowds exploded – the score board showed the time of 46.53 seconds and there was a home leader.

Not one of the seven riders left had any chance of going clear and catching Bruynseels’s time. Steve Guerdat gave it a good go though. On his extremely well jumping 10-year-old mare Bianca (Balou du Rouet x Cardento) – a horse that looks set for future stardom – Guerdat finished second with a time of 47.56, leaving third to Meyer.

As last to go, Stephex Stables-rider Daniel Deusser (GER) produced a fantastic round on Equita van’t Zorgvliet (Cassini I x Darco) – but even though the time was good enough for the win it came on the expense of a rail in the last part of the combination mid-way. In the end, it would put Daniel fourth – still good enough to earn him the leading rider title of the weekend.

The one to drive home in a brand new Audi A6 Allroad Quattro with a Rolex watch around his wrist was Niels Bruynseels, and the winner could not hold his smiles back as he met the press. “I would like to thank Stephan and the whole Stephex-team that I could compete here in Brussels at this wonderful show. I am really happy; my horses have been in great form for the last couple of weeks. It is a real honor to beat great riders like Steve, Janne Friederike and Daniel. I knew I was quite fast, but with these riders still to go you never know if you win it,” Bruynseels said.

Steve Guerdat was not disappointed about being second, and could not be more proud of his fantastic horse Bianca. “It is amazing to have a horse like this. I always believed in this mare, but when you step a new horse up to Grand Prix level there are always new questions of which you don’t know the answers to. She jumped amazing all week, and kept on jumping better and better. The feeling on her is even better than it looks,” Steve smiled from ear to ear.

All riders agreed on what a well-organized event the Brussels Stephex Masters is. “When I was here for the first edition three years ago, I honestly thought it was perfect already. I have come here every year since, and every year it is getting even better – I don’t know how they do it. This is a good lesson from the Stephex-team,” commented Guerdat.

“We have been very lucky to see some beautiful sport all week, it has really been a show for the public,” said event director Stephan Conter. “In the jump-off today, all the riders went for it and Niels Bruynseels pulled off a spectacular round.”

“We cannot organize a show like this without sponsors like Rolex and Audi, as well as my whole Stephex-team,” Conter continued. “We are also very lucky as well to have Uliano Vezzani as a course designer, and the tracks have been great all week.”

“As a sponsor, it is really a pleasure to support someone like Stephan Conter who has such an enthusiasm and passion for the sport and for the quality of the infrastructure. For us as a sponsor, it is easy to support an event like this, as we know it will be organized to the top level,” said Joel Aeschlimann, international sponsorship manager at Rolex

“Being the leading rider means you have had a good show, so I can be very pleased with my weekend. Although I could not win a class, I was placed each time and it was very nice to compete here. Everyday there were a lot of people and the crowd was really behind the riders. It was a really nice atmosphere,” commented Deusser.