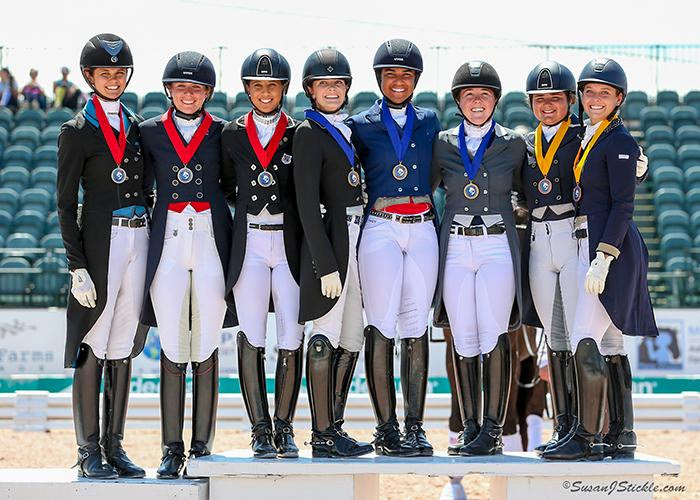 The final week of AGDF competition runs from March 22-25, 2017, and features the Stillpoint Farm FEI Nations Cup™ CDIO 3* as well as the FEI Nations Cup CDIO-U25, and the last „Friday Night Stars“ FEI Grand Prix Freestyle of the season.

It was a red, white, and blue victory today as the USA „A“ Team bested the competition in the FEI Intermediaire II 16-25* CDIO, which determined the team medals for the FEI Nations Cup CDIO-U25, presented by Diamante Farms. The team consisted of 22-year-old Anna Buffini (USA) on her Sundayboy, a 1999 KWPN gelding (Kennedy x Eezelma x Zevenaar), who earned a score of 70.500%; 24-year-old Sean Sierra Keasler (USA) and Lux Stensvang, a 2002 Danish Warmblood gelding (Lobster x Verona Stensvang x Diamond) owned by Keasler, who earned 67.263%; and 20-year-old Kerrigan Gluch (USA) with HGF Brio, a 2005 Andalusian stallion, owned by Hampton Green Farm, who rode to a 62.158%. Debbie McDonald served as Chef d’Equipe.

„One of the main reasons why I came to Wellington was to do the Nations Cup,“ said Buffini. „My dad always says, ‚A goal is a dream with a deadline,‘ and we set this goal to come here and we achieved our dream today. You can’t just count on yourself. They’re counting on me, I’m counting on them, and it’s a different experience. It’s preparing us for the future, and when we are open riders competing on other teams, we can take this experience with us.“

Buffini had the second highest score of the day, riding in just behind Juan Matute Guimon of Spain, who rode Don Diego Ymas to a score of 71.026%.

Keasler commented on what she has experienced thus far at her first ever CDIO-U25 Nations Cup, „This is my first team event, and much like Anna said, as soon as I heard that there was going to be a U25 Nations Cup, it was a goal I set. It’s so nice to be surrounded by people that have the same goals, and such a positive team atmosphere is amazing. I’m extremely thankful for this, and I believe that more people should set goals to be on a team situation. It’s fun being supportive of other riders. I’m happy that I achieved this goal and that I’m here with these amazing girls!“

Gluch noted, „This is my second team experience. I was lucky enough to be able to compete as a team rider when we did the Nations Cup in Hagan. It’s amazing to have people your own age supporting you, riding with you, which is really good in the dressage world. It’s really cool to be on a team where you have the same goals and aspirations.“

Said Blythe of her first CDIO-U25 Nations Cup experience, „I feel so fortunate to be here on a horse that I’ve only been riding for a short amount of time. It was a bit of a stretched goal for us to make this team, and I’m so lucky that we were able to make that happen. It’s such a wonderful experience to be surrounded by people with similar goals and that are going through similar things. I think that U25 is a great way to close the gap between Young Riders and the Grand Prix.“

The team for Canada came in third and consisted of 21-year-old Tanya Strasser Shostak (CAN) and Action Tyme, a 2000 Oldenburg gelding (Aktuell x Ann Lady af Hvarre x Aleksander) owned by Evi Strasser, with a score of 64.579%, and 25-year-old Mathilde Blais-Tetreault riding Utah, a 2001 KWPN gelding (Jazz x Kolinda x Landwind II B) owned by Tetreault. The pair earned a score of 67.500%. The Canadian team was supported by Chef d’Equipe Liz Steacie.

Tetreault commented on the dynamic of the Canadian team, „I did Young riders with Tanya, so it has been fun to do the U25 together years later. It was overall a very great experience, and I’m glad I did it. I had a lot of fun.“

Terri Kane spoke on behalf of sponsor Diamante Farms, „I was very excited when I saw this event on the agenda to go along with the Nations Cup,“ said Kane. „When I was asked to be a sponsor I was honored, because this is the future of our sport. These team competitions are so important to prepare these young riders for the next step.“

AGDF Director of Sport Thomas Bauer commented, „I would like to thank George Williams for bringing up the idea to me last year. I jumped on board immediately because I thought the time was right. Having a class of nine Under 25 riders our first year is really a very good start. I’m very positive that it will grow in the coming years.“

The Senior teams competing in the Stillpoint Farm FEI Nations Cup™ consist of Canada, USA, and Spain. Individuals competing include riders from Australia and Guatemala. Riders can represent their countries in Grand Prix as well as in the Small Tour.

Canada remains in the lead for the Nations Cup title, after strong performances from riders during day one of competition. The USA follows in second position.