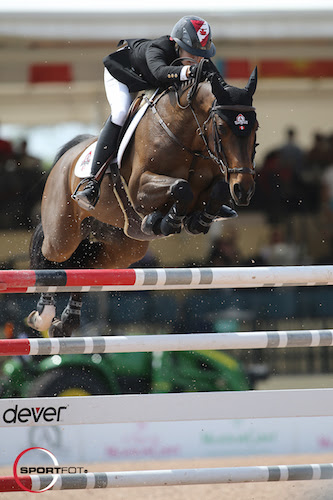 Everyone is welcome to attend! Gates open at 6 pm. For a hospitality seating package on Friday through Sunday, please contact patti@equestriansport.com or call 561-784-1125. Availability is limited so book your VIP weekend soon!

The Hollow Creek Farm FEI Children’s, Junior, and Young Rider Nations‘ Cups will be featured on Saturday, March 5. The $216,000 Lugano Diamonds CSIO 4* Grand Prix will conclude the feature events of the week on Sunday, March 6. The 12-week WEF circuit runs through April 3 offering more than $9 million in prize money.

„He is a really cool horse because he has no idea what it means to go into the ring to school. He only likes to go at speed,“ Foster said of her winning mount. „Last night I was not really even trying to go fast. I just went along at his speed and that was enough to win, which was cool, but this was a little bit more what I was trying to do. I was at speed, and he was just awesome.“

Artisan Farms purchased Brighton as a seven-year-old, and Foster has been slowly producing the gelding over the last three years.

„He has always been a very competitive horse,“ she noted. „This is his first big class that he has won, but he is always up there. He is very consistent, and he goes clear very often. This is the first time I have really put the jets on, and he really rose to the occasion, so it is very exciting for the future.“

Foster also detailed her winning round, explaining that the course suited Brighton’s style quite well.

„He actually does not have a huge stride, so for me to do the leave-out numbers is very fast and that, in a class like this, is really beneficial because there were not a lot of turns or short options,“ Foster explained. „It was more just the numbers, and who had a lot of ground speed, and who could cover those numbers going fast. Having a stride where you could push for those lines was really helpful, but you need to have a careful horse that will also leave the rails up and luckily, I have one.“

Foster is on the Canadian team for Friday night’s $150,000 Nations‘ Cup and feels good with her back-to-back wins to open up this week’s CSIO competition. She also had the added bonus of getting her name on a WEF Challenge Cup win this circuit, as the series has been dominated by teammate Eric Lamaze, who has won four of the eight classes so far.
„Normally the ‚WEF‘ is Eric’s class, so at least we are keeping it in the Artisan family,“ Foster smiled.

In addition to the winning prize money, Foster earned a $3,000 bonus for wearing her SSG ‚Digital‘ style riding gloves as part of the SSG Gloves ‚Go Clean for the Green‘ promotion. She was also presented with the Champion Equine Insurance Jumper Style Award for week eight.

The eighth week of competition at the 2016 Winter Equestrian Festival continues on Friday featuring the $150,000 FEI Nations‘ Cup in the International Ring in the evening. The Ariat National Adult Medal will be the highlight class in the Rost Arena in the morning. For more information and full results, please visit www.PBIEC.com.