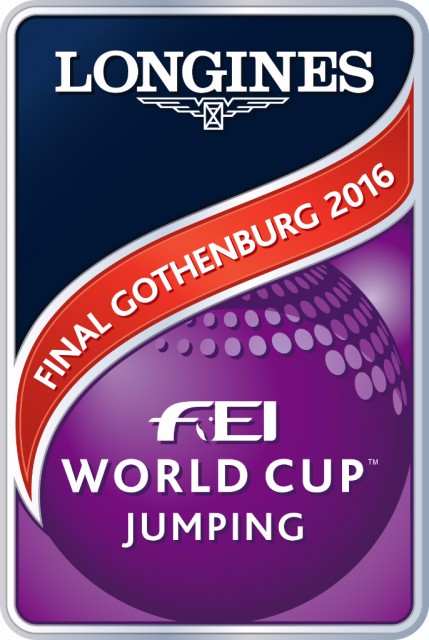 Olympic champion, Switzerland’s Steve Guerdat, showed nerves of steel when galloping to victory at the Longines FEI World Cup™ Jumping Final for the second year in a row today. The crowd in the Scandinavium Arena in Gothenburg (SWE) went wild after the 33-year-old rider produced two faultless rounds with the 10-year-old gelding Corbinian to claim the €172,500 prizewinner’s purse. It was the perfect end to a great event for the Swiss champion, bringing his earnings for the weekend to €232,100. The Netherlands’ Harrie Smolders took the runner-up spot and a handsome pay cheque of €131,250 for today’s two rounds, while Germany’s Daniel Deusser, winner of the Longines FEI World Cup™ Final in 2014, stood on the third step of the podium and joined Smolders in hoisting Guerdat and the trophy into the air in celebration.

“It’s really special”, an emotional Guerdat said. “I wasn’t really thinking I would stand here in front of you as the Final winner today. I have a really strong team supporting me, people who get up early every morning and work really hard, so I want to thank my whole team, it’s really a team victory. We all have the same goal. It’s me who’s standing here in front of you, but there are many people who should be standing here with me. It’s a team victory more than ever I think.”

Guerdat’s biggest wins have come with three different horses – Nino des Buissonnets at London 2012, the mare Albufuehrens Paille in Las Vegas last year, and now his latest champion Corbinian. Today’s victory was the fourth for Switzerland in the FEI World Cup™ Jumping series, with Markus Fuchs lifting the trophy in 2001, Beat Mandli in 2007 and Guerdat now making it two-in-a-row.

The Swiss rider was already out in front going into today’s final decider, but had to leave all the fences on Santiago Varela Ullastres’ brilliant course standing in both rounds in order to complete his historic double. As the first round began the sport’s biggest stars were all lining up behind him, three-time FEI World Cup™ Jumping champion Marcus Ehning from Germany just two points adrift after the first two days’ results were converted into points, and Deusser and Smolders carrying just 3 points apiece while Belgium’s Nicola Phillipaerts was one fence adrift of the leader carrying four.

The first track was enormous but jumped really well, the double at fence nine proving the bogey with its water trays under each element. Austria’s Max Kuhner produced the first clear with the fabulous nine-year-old grey, Chardonnay and next to leave all the timber intact was Dutch star Maikel van der Vleuten with VDL Groep Verdi. Germany’s Christian Ahlmann with Taloubet and Ireland’s Denis Lynch with All Star kept their scorelines at eight points apiece when also foot-perfect and that began to put the pressure on the remaining 10 of the 26 starters. Germany’s Marco Kutscher and Chaccorina were fault free to hold on a six-point tally and Penelope Leprevost from France did likewise with Vagabond de la Pomme to remain on five, but Philippaerts dropped out of contention with two fences down.

Both Smolders’ stallion, Emerald NOP, and Deusser’s gelding Cornet d’Amour with which he won the 2014 title in Lyon France, breezed in without incident but Ehning would pay a high price for a single error at the second element of the bogey double at nine. So when Guerdat added nothing to his scoreline Smolders and Deusser were still stalking him closely.

The second track was another colossal test and again definitely not for the faint-hearted. But this Final has produced spectacular sport and continued to highlight extraordinary horses and super-talented riders, with the audience loving every moment of it. When Australia’s Chris Chugg jumped clear in the second round with the beautiful mare, Cristallina, who is only eight years old, the spectators jumped to their feet to give them a standing ovation and, always the showman, Chugg produced a lovely bit of theatre as he accepted their appreciation. And America’s Callan Solem, almost unknown across the European circuit, also drew huge applause for her brilliant second-round clear with VDL Wizard.

In the end it was a case of whether the three at the top end of the leaderboard would crack, but none of them did, Smolders throwing down yet another jumping exhibition with Emerald before Deusser followed suit with Cornet d’Amour.

The atmosphere was at fever-pitch as Guerdat rode back into the ring for the last time knowing that, although he could afford a few time faults, a falling pole would put paid to his chances, leaving the Dutchman and the German battling it out for the title in a third-round jump-off. The Swiss rider set off with his jaw set and his adrenalin running, and the crowd rode every fence with him and his horse, wriggling in their seats with concern and anticipation only to burst into an explosion of sound as the pair galloped through the finish with a zero score still on the display screen.

Guerdat admitted that the memory of last year’s Final still haunted him despite his victory, so his main concern was to get things absolutely right this time around.

“It was important to me to ride better than last year – I won, but that was the only reason to be happy that day! I didn’t ride very well and that stays always in your head” he insisted. He was also concerned about his 10-year-old gelding, Corbinian. “I didn’t want to put too much pressure on him, I wasn’t sure how he was going to react over the championship because he doesn’t have that much experience. But he felt very good already when I rode him before the class and powerful again, after a day off yesterday. Today I thought he was really fighting with me which is not always the case. Sometimes it’s more that we are not fighting against each other but that we are trying to look for each other, and its just not that smooth. But today…it felt that the horse was really with me and fighting with me, and that gives you confidence along the course” he explained.

It was their time in the second round that separated Smolders and Deusser, the Dutchman’s quicker trip giving him the edge. Smolders was delighted with the performance of his stallion, Emerald and really enjoyed the whole experience of the 2016 Final. “I was very thrilled because this was his (Emerald’s) first championship and he convinced me in every way this week. He’s a very attractive horse and he loves the atmosphere here. I must say it was great sport and super exposure of how our sport should be, the audience, the course designing, everything was very good publicity for our sport. Also to have this kind of money from Longines is just as it should be.”

Third-placed Deusser said he had no regrets about his placing. “I made a stupid mistake on the second day and that’s why I’m third, but the sport has been really strong this weekend. When I walked the second-round course i was quite impressed, it was big! I saw Steve in the warm-up and we actually laughed and went “waaahhhhh!”. I said to him if we are still on the podium in the top three after the second round I’m happy with that, and he laughed and said ‘me too!”. In the end that’s how it finished and for me that’s a reason to be happy today!” he said.

The fun and games on the presentation podium underlined the great sportsmanship and the tremendous spectacle enjoyed by everyone in Gothenburg this weekend. All the riders had every reason to be proud of their contribution a great event, but Guerdat looked to be the proudest man of all as he finished up this evening on a poignant note.

Asked if he had the opportunity to share his success with his father, Philippe Guerdat who was at the show as Chef d’Equipe for the French, the double-champion said, “yes…..we saw each other…he’s been a rider himself so he knows what it’s about, we come from the same life, the same world so we don’t need to talk too much or see each other too often. We just love each other, and those moments belong to him as much as they belong to me – like father and son.”