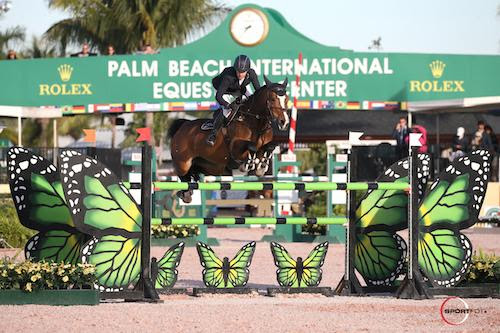 WEF 10, sponsored by Horseware Ireland, features CSI 3* competition at the Palm Beach International Equestrian Center (PBIEC) on March 15-19, 2017. The week’s highlights include the $130,000 Horseware Ireland Grand Prix CSI 3* and the $35,000 Hollow Creek Farm Under 25 Grand Prix Series Semi-Final, presented by The McNerney Family. All of the week’s live streaming can be viewed HERE. The 12-week WEF circuit continues through April 2, 2017, awarding over $9 million in prize money.

„I am really pleased,“ Kraut said of Caelle. „I got her at the end of her six-year-old year and just spent last year doing the seven-year-olds. This was her first time ever jumping FEI, so she is off to a good beginning.

„She is wonderful,“ Kraut continued. „She is super brave, she is so fast, and she is just very competitive. This morning, even though it is her first time jumping in an FEI 1.45m class, I knew she would not have any issues. I just went as quick as I thought I needed to, and she is so fast.“

Detailing her winning round, Kraut stated, „Michel Vaillancourt set a nice course this morning. It was a few sharp turns and then quite a nice gallop across the ring a couple of times, which she does well. It was tricky enough. The triple combination was difficult to gallop in; it was a big vertical to vertical and then an oxer. She handled that well. Really, I just tried to be as neat and quick as I could. Then towards the end of the course, I took a little bit of a pull and slowed her down just because she does not know still about going flat out at that height of jump, but she responded. I am just very happy with her.“

Caelle will jump again in Friday’s 1.45m competition. Kraut is taking her time bringing the mare along and hopes to step her up to 1.50m later this season.