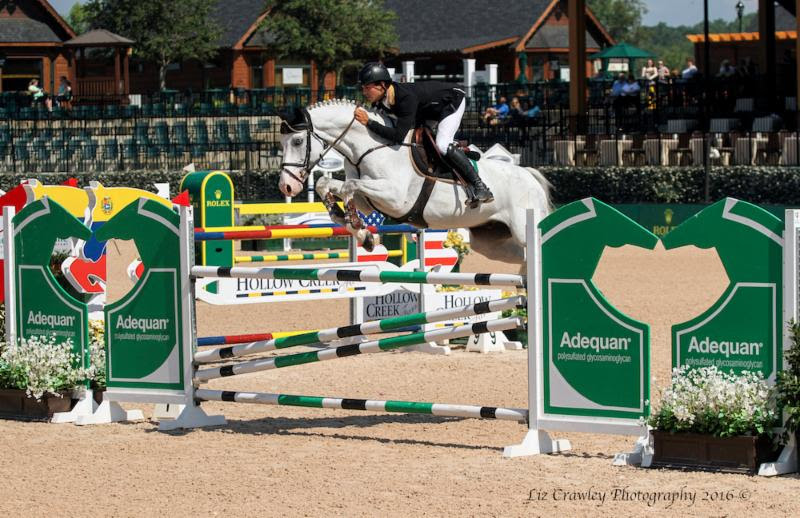 Press Release Tryon International Equestrian Center – Eugenio Garza of Wellington, FL, and Armani SL Z finished a beautiful double clear effort in the $25,000 Under 25 Grand Prix to conclude Tryon Summer I competition at Tryon International Equestrian Center (TIEC) on Sunday, July 3. The pair secured the win with a time of 37.577 seconds in the jump-off round, while Sydney Shulman of Greenwich, CT, piloted both of her mounts to second and third place respectively. Toscane De L’Isle captured second place, finishing two seconds behind Garza in 39.728 seconds, while Lakvels picked up third place, crossing through the timers in 42.415 seconds. Competition at TIEC resumes on Wednesday, July 6, with the start of Tryon Summer II.

Garza, a rising star who competes internationally for the nation of Mexico, and Armani SL Z are gaining experience together and have earned multiple top place finishes during their spring travels together. As one of two talented eight-year-old mounts in Garza’s string, Armani SL Z  is one of the nicest horses in the barn, according to Garza.

„Armani is the oldest son of the Asca Z and we’ve been building him up with my trainer Eddie Macken for a year and a half now,“ he explained. „We’ve been waiting a year to do this type of class with this horse. He’s easily the most special we have right now and is one of the nicest horses I’ve ever sat on in my life.“

Armani SL Z, a flashy grey 2008 Zangersheide stallion by Asca Z, is an eye-catching ride, who Garza competes with a confidence and poise well beyond his years. The duo are just solidifying their relationship at the top levels of the sport, but have immense potential. Garza explained their progress with Armani over the course of the past year and also noted that the raw talent of the stallion is something he’s never seen before.

„I really don’t think he has any weaknesses. He’s an unbelievable horse. It’s so fun to improve and learn on a horse like this and I’m hopeful that our streak continues,“ he added.

The course, which was set big and took a forward ride, suited Armani SL Z and Garza, who found the technical questions beneficial to their growing competition experience together.

„I’ve know Oscar Soberon since I started riding in Mexico eight or nine years ago. He always builds amazing,“ he detailed. „The course had a lot of challenges and he’s been right on the time all week so I knew that it would be tough. It was big enough and had a couple of interesting questions around the course.“

Careful and attentive to not push the stallion too far so early in his career, Garza tactfully rode with the goal of gaining valuable competition experience, but also begin testing their ability to secure a quick and efficient jump-off round.

„I wanted to give him a good rhythm, especially with regard to the time. It was a very fun course to ride and I thought he did very well,“ he noted.

Entering the ring after Sydney Shulman, who finished in second and third place in the class, Garza found areas around the course where he felt he could make up the time and ultimately secure the win. He explained, „I saw Syd go on her first horse and she rode a beautiful trip that was smooth and efficient. I thought it was a really fast time and when I went in, I really honestly gave it all that I had with Armani as much as I felt comfortable with.“

„I’m really looking to building up our horses here for the next four weeks. It’s nice to be consistent with a venue and give each horse the time they need,“ he detailed. „With my two experienced mounts, Empire and Bariano, we want to do well in the grand prix classes here. We’ve had a great summer so far and we hope to continue that looking forward.“

The $10,000 High Junior/Amateur Owner Jumper Classic presented by Asheville Regional Airport saw Emanuel Andrade and his own Contenders XC take top honors, finishing the jump-off in 36.651 seconds for first place. The pair edged Nicole Loochtan and her own Carla de Kalvarie Z, who dashed through the timers in 34.384 seconds, but finished with four faults, to place second. Victoria Karam, who owns and competes New Life HM, collected third place, dropping a rail in the jump-off and finishing with a time of 38.171 seconds.

Alexandra Duval of Wellington, FL, and her own XM earned victory in the $5,000 Medium Junior/Amateur Owner Jumper Classic presented by Ariat with a time of 34.015 seconds. Kady Abrahamson of Loveland, OH, and Icebreaker, owned by Abrahamson Equestrian LLC, finished in second, securing a time of 34.24 seconds, while Sabischy Hassler of Wellington, FL, and her own Good Boy HM rounded out the top three, stopping the clock in 34.521 seconds.

Daniel Geitner of Aiken, SC, and Lionsgate, owned by Roy Wilten, earned the victory in the $10,000 Pre-Green Classic, finishing with a final score of 164, while Morgane Qualls of Murphreesboro, TN, and Lookalike, owned by Sandalwood Farms, took second place with a final score of 162. Sophie Simpson of Wellington, FL, and Haiku, owned by Sorensen Stables, collected a third place in the class, which saw 13 total entries.

Soon To Be, owned by Jennifer Smith, and ridden by Jennifer Hannan of Wakefield, RI, sat atop the class in the $2,500 USHJA National Hunter Derby, receiving a two round score of 176 for the win. Blythe Marano of Franklin, TN, and Fondant, owned by Virginia Ingram, earned a 172 to finish in second place, while Jennifer Smith of Wellington, FL, piloted her own Commodore to a respectable third place finish with a score of 168.

The $1,000 Junior Hunter 3’3″/3’6″ Combined Classic saw Summer Hill and Eclypse, owned by Holly Orlando, lead the class with a two round score of 169. Cecilia D’Amore of Gastonia, NC, guided her own Vintage to a second place finish, receiving a 169, while Marion Scott Head of Brownsboro, AL, and her own Khan collected a total score of 160 from the judges to take third place.

For more information on TIEC and to see a full list of results please visit www.tryon.com.