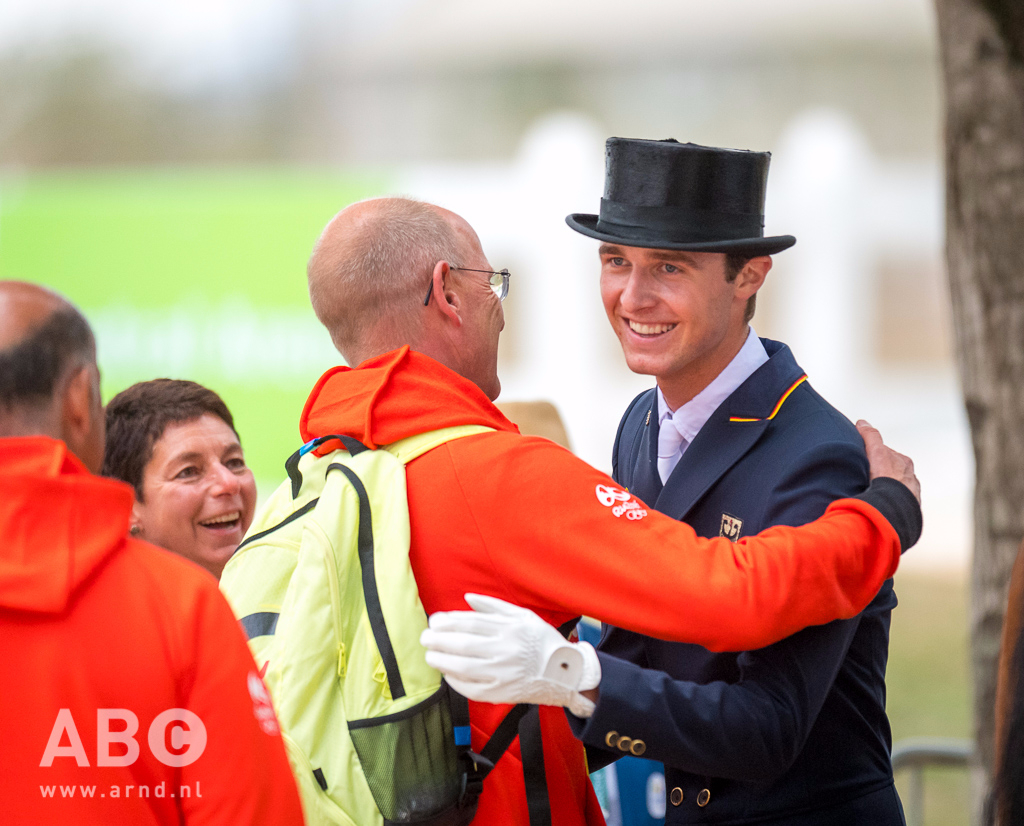 Press release FEI – Great tests from both Dorothee Schneider and Sonke Rothenberger have given Team Germany a firm hold at the top of both the individual and team leaderboards after the opening day of Olympic Dressage at Deodoro Olympic Park in Rio de Janeiro (BRA) today. The Grand Prix is the first of the two competitions that will decide the team medals, and 29 of the 60 competing horse-and-rider combinations took their turn during the day.

It was an emotional roller-coaster from the outset, 38-year-old Akane Kuroki bursting into tears of relief and delight after posting a score of 66.90 with Toots to get the Japanese effort underway. There was deep disappointment for The Netherlands’ Adelinde Cornelissen who had to retire when her great campaigner, the 19-year-old gelding Parzival, was way under par however. The pair who took team bronze and individual silver at London 2012 began their performance, but the 37-year-old rider felt her faithful gelding was unable to show his best.

“It started yesterday morning, I came to the stable and his cheek was completely swollen and it appeared he was bitten by a spider or a mosquito or whatever….he had a fever, so we managed to get that down yesterday, eight or nine hours on liquids and everything was good, his temperature was down again, and this morning also. So I discussed it with the team vet and he said go ahead, give it a try, but then he felt totally empty in the ring, and I didn’t want to push him through this – he didn’t deserve that” Cornelissen explained.

Next to go however, Rothenberger was on the opposite end of the adrenalin spectrum when rocketing right to the top of the scoreboard with some fabulous work with a gelding more than half Parzival’s age, the nine-year-old Cosmo. “I’m very happy, he’s the youngest horse in the field and I am one of the youngest riders!” said the 21-year-old. He’s very excited to be representing his country at the Olympic Games. “It’s amazing to be part of this team – I hoped to take the pressure away from the others with a good score” he said. He has built up a great relationship with his Cosmo and clearly admires this horse. “I first rode dressage in pony classes then I went jumping, but Cosmo got me back into dressage. I thought jumping a 1.60m fence was the only thing that could give me goose-bumps but Cosmo proved I was wrong about that!” he explained after scoring 77.329.

Then Fiona Bigwood set British hearts racing with a great test from Orthilia that put her, temporarily, into second spot. It’s a real family outing in Rio for the 46-year-old rider who has brought her three young children and whose husband, Anders Dahl is competing for Sweden, another of the 11 nations contesting the team medals. Bigwood competes with a patch over her right eye following an injury that seriously damaged her sight two years ago. But she steered her 11-year-old mare to a great mark of 77.157.

“That’s a lovely score on the board for the English team” she said after leaving the ring. Talking about her restricted vision she explained “in the warm-up I can’t see to the right so I get nervous. It took some time to adjust, but I’m used to it now and this mare is wonderful, I wouldn’t be here riding any other horse.”

With Cornelissen unable to contribute to the team effort a good result was required from her Dutch team-mate Edward Gal, and he didn’t disappoint when putting 75.271 on the board.  His horse, Voice, is sensitive so he said “in the first part of the test I was bit careful because he wanted to run away!” But he was still thinking about Cornelissen’s disappointment – “I tried to comfort her, but it was very sad for her” he said.

Schneider was last to go with Showtime FRH, and from the moment the pair came before the judges the scores went into overdrive, a handsome 80.986 putting them way out in front.

“I have this horse since he was three and at the beginning of this year he turned a corner and he said “I am here! The feeling you get with him is amazing outside in the warm-up, and then when you come into the arena he says “I want to do this with you” and he goes in a light way. It’s easy, you don’t have to use pressure, although in the left pirouette there was a little misunderstanding today, but I’m very happy!” said the 47-year-old who was a member of the German silver-medal-winning team at London 2012.

The Grand Prix continues tomorrow and is followed by the Grand Prix Special on Friday which will decide the team title. As tomorrow’s action begins Germany’s Schneider and Rothenberger hold the first two places followed by Bigwood in third and Gal in fourth, while Germany tops the team rankings with The Netherlands in second and Great Britain in third.

Quotes:
Mary Hanna (AUS) – “I’m thrilled with him, this was a personal best for him, he has only done five Grand Prix in his life! He was a bit of a child delinquent, he once bolted with me at a show and it really wasn’t nice, he was not so easy and reliable, he’s dumped a few people in his time but he’s a very well-behaved young man now! I used to be an event rider, I had a dressage and I tried to event him but he didn’t like to gallop and he fell in a ditch one day and cut his face so I decided we should stick to dressage. I train with Patrik Kittel (SWE) and I’m based in Munster (GER), we have a little Aussie community there!”

Sonke Rothenberger (GER) – “We got Cosmo at four years old and my father rode him until he was six and then I took him over. He’s a very special horse.”