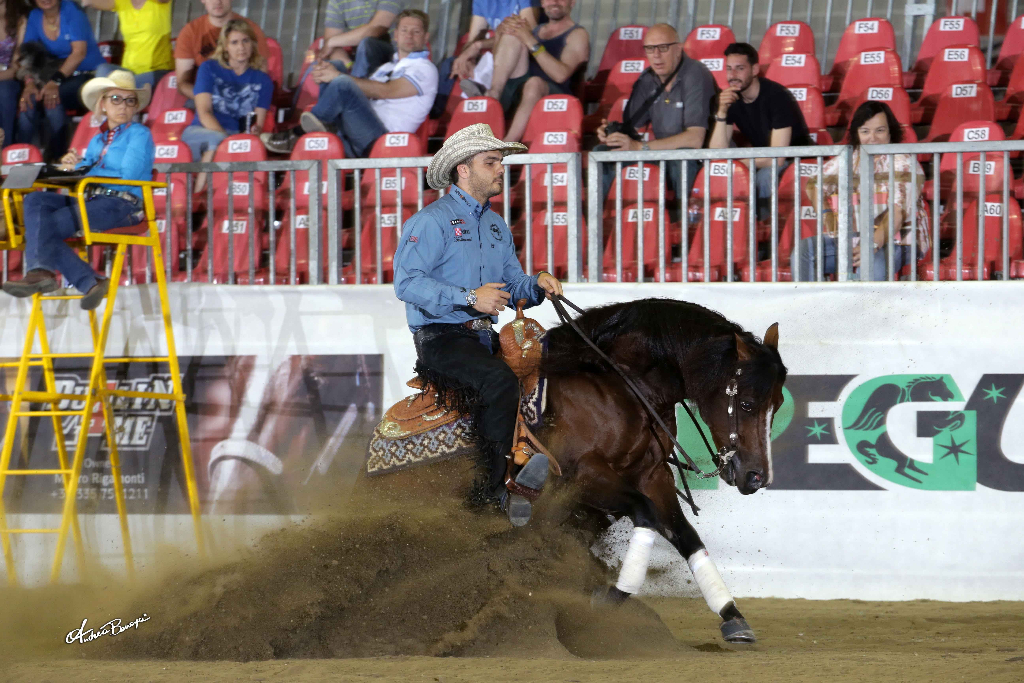 Press Release / Reining –  IRHA-NRHA Derby, day 3: today, also the go-round leaders for the Open division were decided. 140 horse-and-riders combinations competed in the arena, which means a number of entries almost doubled if compared to the past edition of the show. Considering the singles different divisions, there were 48 entries in level 4, 65 in level 3, 102 in level 2 and 58 in level 1. Powerful horses, guided by professional reiners of extremely high skills and talent, have been judged by a team of experienced judges: Nic Baar and Janette Steffl from the Sates, Uli Koffler from Germany, Max Canu, Maura Moraglione and Enrico Righetti from Italy.

With a score of 222, the italian top trainer Gennaro Lendi, gained the top of the Open leven 4 go-round ranking astride Spatatino, a stallion born in 2010 by Spat Olena and out of Topsail Cal Bar, owned by Sara Fabbri. The pair, appearing extremely fit and sound, has just gained the Open podium at the NRHA Rome Shoot-In, with an extraordinary 229 score, and in the past was IRHA/NRHA Open Derby Level 4 Champion 2016, and placed 3rd at the NRHA Germany Derby Open.
The top trainer born in Naples, now working in Tuscany, in the beautiful facility and breeding center owned by the famous photographer Oliviero Toscani, left behind for just 1/2 a point the always brave and clever belgian rider Cira Baeck, riding Gunners Snappy Chic owned by Piet Mestdagh, and therefore placing 2nd in the Open Level 4 division.

Leading the Open level 3 go-round, with a nice 218 score, is Sylvia Rzepka, one of the most famous german trainers competing in international shows: she was riding Uss Nu Spook, a five years-old stallion by Smart Spook and out of Uss Nu Chex, bred by Franco Olivero. Sylvia chose him for the owner Günter Fellinger when he was just a yearling, and she trained the stud since then. The horse show record figure out the Austrian Futurity and German Futurity finals 3 year-old level 4, the German Futurity final level 4 and the Italian Futurity finals level 3 in the 4 year-old section.

The second best score in the level 2 division (217), which is also the best one in the level 1 ranking, was set by the italian trainer Mirko Piazzi, riding a brand new entry for his stable: we are talking about Jessies Lil Dreamer, that arrived under the guide of the bolognese trainer only three weeks ago, during a regional show. The beautiful mare, born in the States at Casey Hinton’s stable, is by Magnum Chic Dream and out of Lil Ruf Jessy, and she is 6 years old. The mare was purchased by Vittorio Rabboni in 2014, after taking part to the NRHA Futurity. Once in Italy, she was chosen by one of the best Non Pro riders in Italy, Cecilia Frediani, who showed her at the IRHA/NRHA Derby 2015, gaining the finals in level 4, 3 and 2. In 2016, Vittorio Rabboni bought her back and used her as a breeding mare, and only few months ago the nice horse has come back to work under the guide Nunzio Ceglia, trainer at Rabboni Performance Horses. Piazzi, “showman” in this competition, was quick to tribute the great job done by Ceglia with the mare before the Derby.
Nicola Sergio scored 216,5 and therefore placed reserve in the level 2 riding Magnetic Ziggy Rb for the owner Maria Chin.

In the end, there is an ex aequo for two italian riders in the level 1 Open section, both scoring 215: we are talking about Angelo Benedusi and Francesco Schippa.
The first one was riding Aristocrat Sorrels, 6 years old quarter horse gelding, with a work blooodline (Tassas Aristocrat and out of Miss N Holly), owned by Marta Alboni, youth rider training with Angelo. The nice horse was previously shown by Nicola Sergio, and is actually competing with great results in the difficult regional Championship organised by Lombardia Reining Association, in the Intermediate Open classes.

Nice ride also for Schippa and his mate Whiz A Chex To Cash, 5 years old gelding, purchased by Rita Miccolis just few days before the Derby. The horse was born and bred at 23 QH facility, in Piemonte, and was trained by Bernard Fonck who took him to the Futurity L4 Open finals.

The show schedule of the IRHA/NRHA Derby now waits for the the Non Pro Finals, in the afternoon and evening of friday, and the great and thrilling Open Final for Saturday: don‘ miss it!