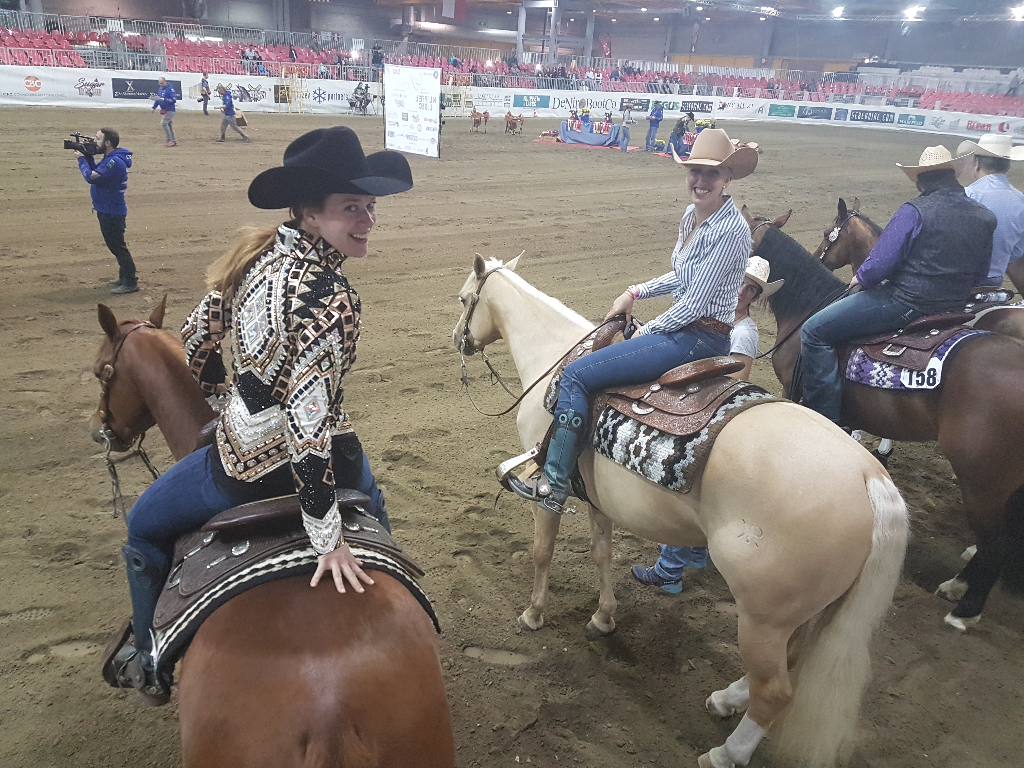 Austrian Anna Lisec and Gunners Nite Slider went into the arena as third rider of the second section. Pattern 12, which starts with a run-in followed by a sliding stop, was ridden. The first stop of the four-year-old gelding was enormous, the backup fluid and rhythmic. And it kept going well: Anna and her „kit“ showed great fast circles. At the first speed control to the small slow circle the gelding kicked, which means five points deduction. In the end the ride was rated 217.5.

This is Anna’s ride which was live streamed on Facebook:

Until the third to last starter Anna remained at the top of the ranking. Then the leader of the qualifying round, the Italian Edoardo Bernadelli with RS Gaudi Jac (RS Great Jac Feona x RS Shadow Olena) went into the arena. The pair showed a penalty-free ride and ended the pattern with a score of 219.0, which meant victory and title NRHA European Futurity Champion Non Pro 2017.

Anna’s joy about the Reserve Champions title is huge: „It was my first time at a European Futurity, I was really looking forward to it. Kit is not always easy to ride, but it was fantastic!“ Anna’s big goal is the 2018 World Rally!

Juergen Pritz and his Rose Of Mercedes put themselves in fifth place with a score of 211.0: „It was an exciting but also a tiring week, I am very satisfied with my mare, she gave everything, it was really great! I do not know yet what we’re going to do. Perhaps I will show her at the Austrian Futurity in August, or I will breed with her, we shall see. „

Julia Gaupmann (Lower Austria) and ARC MS Whiz finished with a score of 206.5 eighth in level 3 and fourth in level 2: „I am very satisfied with our performance. She gave everything as always. She could not be trained for most of March because of a biceps injury so I’m very happy how this turned out. Unfortunately our worst maneuver was the stop, but she tried so hard, she was great! Now she’ll have a break for two months and from May, June we will train again for The Austrian Futurity in August.“

EQWO.net will report on all our channels and live from Cremona!

This article was written by EQUESTRIAN WORLDWIDE – EQWO.net and is NOT a press release. Copying of text and images is not allowed.