The Amadeus Horse Indoors (07.-10.12.2017) in Salzburg is a highlight in the Alpenspan calendar every year .On one hand the green-orange booth is a popular meeting point and Alpenspan is a long-time sponsor of Austria’s horse and dog festival at Christmas time and on the other hand the Alpenspan riders evidently feel good in the Messezentrum Salzburg. Was it last year „Master of Faster“ Gianni Govoni who won the CSI4 * Grand Prix, this year Gerfried Puck (ST) shone with Bo and Bionda in the 4-star competitions as best Austrian.

Already in the Big Tour Opening (1.45 m) on Thursday (07.12.) the Styrian was eighth with Bo as best Austrian. On Friday in the Silberpfeil Masters over 1.50 m Puck in the saddle of eleven-year-old Indorado daughter Bo was only beaten by Luca Maria Moneta (ITA) and Hans-Dieter Dreher (GER) and placed third with a faultless ride. Similarly successful on Saturday both in the Banki & Sohn Trophy over 1.50 m (9th place with Bionda) and in the PAPPAS Championship (6th place with Bo) the best Austrian’s name was Gerfried Puck.

Of course „Mr Alpenspan“ himself, Wolfgang Pirker, was present at the fair with a booth which as always is the meeting point of the Who is Who in equitation. The contest „I love Alpenspan“ was particularly well received! 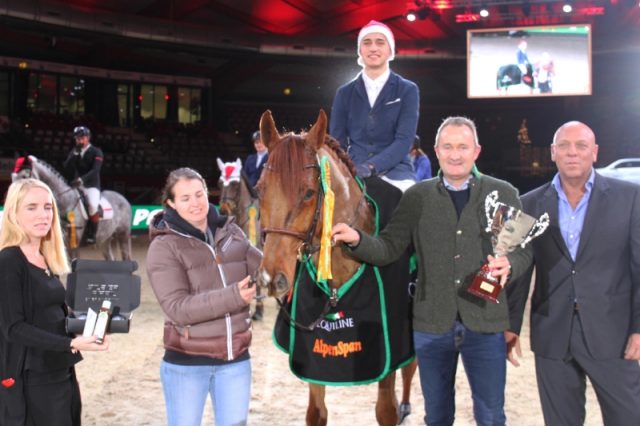 This article was written by EQWO media house GmbH ​on behalf of Alpenspan​.